Inequality is present in technological device already at the earliest stage of prototyping. Developers usually transmit values and norms of certain groups while marginalizing other users by turning a blind eye at gender, disability, age and other different user groups’ characteristics. In the following article I will address issues concerning problems that elderly people might experience while mastering computer technology as most part of their lives they have spent in the different technological environment. 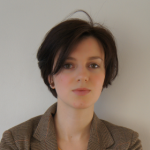 Lyubava Shatokhina is currently a resident researcher at the Center of Science and Technology Studies and graduate student in anthropology at the European University at St. Petersburg. Her master thesis in anthropology was dedicated to the issue of digital divide and computer mastering by elderly people.Having earned a first master’s degree in Philosophy of Culture and a second in Sociology, she then pursued anthropology, a discipline that bridges the gap between theory and practice. Her current research interest lies in the area of professional values, norms, and practices, as well as life-styles of the Russian-speaking programmers who have relocated to Finland. For the past three years she has also been working as an applied anthropologist in the field of Russian consumer culture.