Denial-of-Service attacks are the largest thread to Internet servers. We present IP Fast Hopping, easily deployable and effective network-layer software solution against DDoS attacks based on pseudo-random changing of server’s IP address on addresses from a large pool of IP addresses. 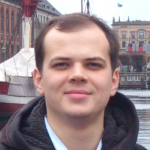 Kravtsov holds Master’s degree at 2014. Theme of master’s dissertation is “Protection against traffic interception and DDoS attacks based on method of IP hopping”.

Kirill Kravtsov is engineering team lead in TECOM. Kirill for the last 4 years has been the developer of automation software for TV and radio.

Before he has been Regional developer manager at Microsoft, R&D development manager of Intel Corporation Russia and before VP technologies of Russian-American joint venture TECOM and the leader of all research and development for HARRIS Corp.

Vladimir Krylov has been also professor and Chairman of the Department of Circuit Theory and Telecommunications at Nizhny Novgorod University of Technology since 1983. Professor Krylov brings over 30 years of expertise to this position.

His professional memberships include membership in the Russian Academy of Engineering, IEEE, ACM and Communication Society. He also serves on the Senate of Nizhny Novgorod University of Technology. Professor Krylov is a published author of four books and more than 200 articles.