Kotlin on Android, an easy way to stop coding in Java

It’s vital for mobile developers to implement their ideas qickly, otherwise competitors will take over. The shorter the code is, the quicker the idea becomes the application. Short code is simpler to understand and easier to refactor too. The talk reveals how to use Kotlin for fast and fine mobile application development on an example of an application already available in Google Play. 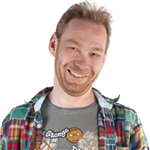 Ilya Ryzhenkov – grown as a software developer in the scientific centre of Novosibirsk, he started coding with 16K. Paved his way with twisted pair cables in teeth, connecting science with software and successfully avoided higher education.Worked on developing products in various software companies in Novosibirsk and then migrated to St.Petersburg in 2006 to join JetBrains, where he helped build ReSharper – an intelligent extension to Visual Studio. In 2013 he graduated with honours from the Microsoft ecosystem and jumped over to the other side, the JVM world. Nowadays works on Kotlin programming language.